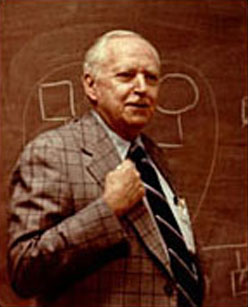 Dr. Murray Bowen’s lifetime work was the development of a new theory of human behavior (now known as: Bowen theory) and will stand over time as a great conceptual leap in the history of natural science and behavioral knowledge. In developing a systems theory of human behavior, Dr. Bowen created thought-filled steps in which we can be coached to “think” and practice living more successfully while getting along, day-by-day, in an increasingly complex world. To learn more about Bowen theory visit: www.bowentheory.com.

The need for this theory is only now beginning to be fully appreciated. Thinking about and coming to an understanding how people relate to people is the key to using constructively all the factual knowledge that has been painstakingly gathered and passed on as “the body of knowledge” over the centuries. Bowen theory is important because it offers useful knowledge and “thinking” toward addressing humankind’s most pressing problem, i.e., the breakdown of meaningful relational contact within and between the generations. 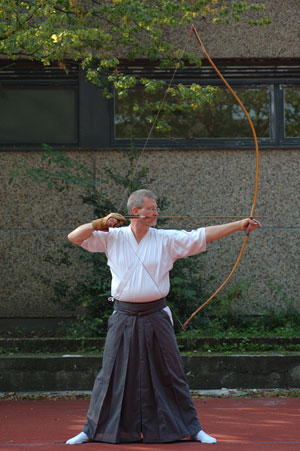 Kyudo, (Kyūdō /弓道), is the Japanese word, for saying, “The way of the Bow” – the “art” of drawing back the bow with the arrow and the finesse of releasing it to the air and hitting the designated target.

Kyudokas (students) learning to hit the target with “beauty and dexterity”, metaphorically indicates they are achieving a perfection of practice in living so as to successfully move along their respective paths in life. Once the kyudoka is able to hit the target consistently, there is evidence that his power of concentration has reached the point that he is not distracted by any internal or external factors that might affect his performance. In this manner, a lifelong mentored and coached practice in the “Art of Archery” becomes vital and integral for achieving a fulfilling and health-filled life.

The Impact of On Target Mentoring

Recently, Gray Fox Archery Association Founder Doc McCune was able to practice the principles of On Target Mentoring with good friend and relative, Jack Allen. Through their work together, Jack was able to overcome some of the limitations imposed by a neurological disorder he has lived with his entire life. His experience is a real-life example of the positive impact of On Target Mentoring.

Jack Allen is a graduate of Syracuse University (1992) with a B.A. in Psychology. He was also an offensive tackle in the Syracuse football program. Now he is a Project Manager for a contracting firm working the Securities and Exchange Commission, DC.

Jack was born with “essential tremor,” a neurological condition causing his hands to shake a little and, when anxious, more. He believed he’d never be able to shoot well again. He had shot in his early years, but as the pressures of life grew so did the tremors.

Here is just a little bit about Jack’s experience, from his point of view:

The Impact of On Target Mentoring

“I was encouraged by Gray Fox Archery founder, ‘Doc’, who is my uncle-in-law, to get back into active archery, in part, as a means of learning to focus in order to calm anxiety and gain control over the symptoms of essential tremor.”

“Last year I bought a bow and have been practicing on and off. I was always hitting left of the target, even after adjusting the sights! I called Doc and told him what I was doing. He gave me instruction and coaching over the phone–it really helped. A few tweeks of the sights and I was doing really well.”

“This year I’ve been chosen (by lottery) to hunt in the Leesburg, VA area near my home. I found out I had to get certified in order to participate. I searched the web and called around, and was directed to Ruth Rowe of The Archery Program (http://thearcheryprogram.net) who instructed me for 1 hour. Between the two: Doc and Ruth, I have improved tremendously and earned my certification to participate in the hunt.”

“To my amazement, my tremor has diminished. I love archery, hunting, and the out doors in general, and would love to join with GFAA promoting their program and even help to start one of their chapters and develop an indoor archery range in Leesburg, VA.”

By Working with GFAA Founder Doc McCune using the principles of On Target Mentoring, Jack was able to reduce the symptoms of his essential tremor. This has positively impacted his ability as an archer and, more importantly, his life as a whole.

The three simple but powerful aspects of On Target Mentoring: